Apr. 5, 2021 - POSCO is carrying forward a transition of business structure focused on ‘Green & Mobility’ based on various eco-friendly car capabilities in the group. 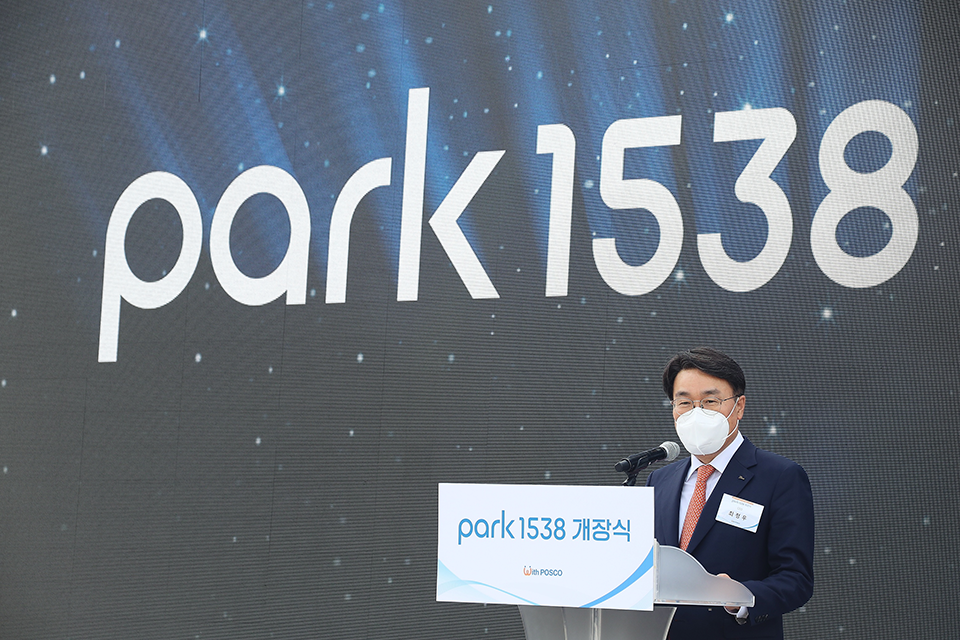 In a message to mark POSCO’s 53rd anniversary, POSCO CEO Choi said that the group should shift its business structure from steel-oriented business to Green & Mobility. He emphasized, “In the transition phase of the megatrend represented by low-carbon and eco-friendly environment, POSCO group should go beyond the steel business and take a leap toward becoming a leading company of eco-friendly businesses such as steel and components for electric cars, secondary battery materials, hydrogen energy, and more.” He added, “Let’s enhance manufacturing capabilities of secondary battery material business which the group has been fostering as its core business and create a Value Chain of cathode and anode materials and their raw materials such as lithium, nickel, and graphite to positive and negative active materials by gathering group’s capabilities and ultimately become a Total Solution Provider and a trusted partner in the electric vehicle (EV) market that encompasses key components such as steel for electric cars, motor cores, and raw materials for secondary batteries.”

In January POSCO launched ‘e Autopos’, an integrated brand of eco-friendly vehicle and solutions, in line with its goal of leading electric vehicle (EV) market by combining the group’s capabilities such as supplying products and solutions related to eco-friendly vehicles. Major solutions are world’s best Hyper NO(Non-Oriented electrical steel), high-strength steel for EV body and chassis, battery pack steel, as well as POSCO Chemical’s cathode and anode materials, plus EV Traction Motor and bipolar plate for FCEV (Fuel Cell Electric Vehicle) produced by POSCO SPS, a subsidiary of POSCO International and customized application solutions for clients as a whole package.

POSCO Group’s market capitalization is also increasing significantly due to its shift toward ‘Green & Mobility’ business structures and the rapid growth of EV market. The market capitalization of POSCO Chemical and POSCO International increased by 9.7 trillion won and 200 billion won as of March 31, 2017, respectively compared to the end of 2017, when investments in secondary battery materials and EV began in earnest. Considering POSCO’s share ratio, the value of POSCO’s stake rose by around 6 trillion won.

In a speech marking the 53rd anniversary, CEO Jeong-Woo Choi reiterated that safety and the environment should be the top priorities and implement ESG management to grow as a 100-year company. “Safety is the basis of all sustainable management,” he said. “As there is no boundary between management and unions, POSCO and partners, and POSCO and its subcontractors when it comes to safety, I ask everyone to be actively involved in safety campaigns to protect precious lives.”

In addition, CEO Choi thanked executives and employees of POSCO Group at home and abroad who overcame the difficult management environment by participating in emergency management activities last.

Earlier on March 31, POSCO held an opening ceremony at the Waterside Park near its headquarters in Pohang to open ‘Park1538’, a high-quality cultural complex for employees and the public with CEO Jeong-Woo Choi, outside director, POSCO’s labor union, labor-management council, POSCO masters, the best volunteers, as well as partner officials such as president of partner association, cochairman of coexisting council and others attending.

‘Park1538’, which will become a landmark of century-lasting POSCO with POSCO and employees of partners, was completed after 18 months of construction. ‘Park1538’ is a compound word of ‘Park’ meaning open space and ‘1538℃‘, which is the melting point of pure steel, also meaning sweat and passion of POSCO people.

‘Park1538’ was designed with a concept of infinite loop, meaning the reusability of steel and infinite human creativity and it was created in the form of a theme park that connects Waterside Park, POSCO History Museum, POSCO Museum, Sky Bridge, and POSCO Hall of Honor. POSCO History Museum, POSCO Museum, and POSCO Headquarters which had been separated, were connected by a 1.2km perimeter roads, allowing to view the company’s past-present-future.

‘Park1538’ is an open space for the public and expected to become a high-quality cultural space in Pohang where anyone can take a walk and enjoy the culture at the Waterside Park, Chaoreum-gil, and rest area full of flowers and trees.